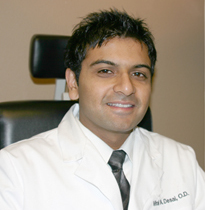 Dr. Viral Desai, OD, a graduate of the University of Houston College of Optometry, was raised in the southwest Houston area. Before attending the College of Optometry, he received his bachelor’s degree from the University of Texas at Austin. For six years he has been in practice in Beaumont, Texas, and now has returned back to the area where he grew up.

Dr. Desai specializes in the treatment and diagnosis of eye diseases, such as glaucoma, diabetic retinopathy, macular degeneration, as well as infections and foreign bodies. He also has a special interest in hard-to-fit contact lenses.

Dr. Desai welcomes patients of all ages from infants to seniors.

You can schedule your next appointment with us online!